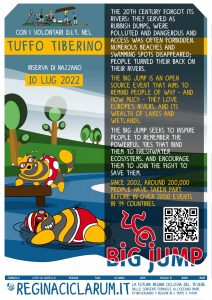 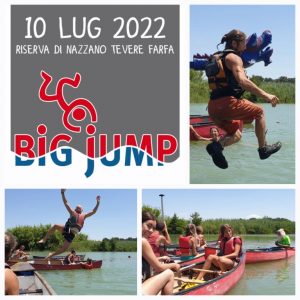 Each year, from source to sea, citizens will take a giant plunge by joining convivial events, demonstrating their commitment to bringing Europe’s rivers back to life. It is a symbolic act to make our voices heard and protect our rivers. By participating we are sending a strong signal to European leaders that much more needs to be done to protect and restore our rivers and implement the ambitious Water Framework Directive. (dal sito ufficiale www.bigjump.org)

Founded by the European Rivers Network in 2002, the Big Jump is an open source event that aims to remind people of why – and how much – they love Europe’s rivers. And its wealth of lakes and wetlands. The Big Jump seeks to inspire people to remember the powerful ties that bind them to freshwater ecosystems. And encourage them to join the fight to save them.

By restoring people’s connection to rivers and lakes, the Big Jump seeks to build support for efforts to protect and restore Europe’s freshwater systems – the goal of the EU’s world-leading Water Framework Directive (WFD). This directive is now under review and the Big Jump will send a clear message to the continent’s decision-makers – do not weaken these laws, implement them.

Many rivers, lakes, wetlands are in a good state but they still need protection, as some are threatened by planned dams and other infrastructure. Other waterways are in urgent need of restoration.

The 20th century forgot its rivers: they served as rubbish dumps, were polluted and dangerous and access was often forbidden. They were used only for navigation and for the production of power. Numerous beaches and swimming spots disappeared; people turned their back on their rivers.

Fortunately, huge efforts have been made since the 90s to restore rivers. And progress has been made. But we are now at a crossroads. Europe can choose to speed up restoration. Or reverse it. Only people power can ensure our politicians choose the right path. (dal sito ufficiale www.bigjump.org)

International day of action for rivers

The International Day of Action for Rivers is a day dedicated to solidarity – when diverse communities around the world come together with one voice to say that rivers matter. That communities having access to clean and flowing water matters. That everyone should have a say in decisions that affect their water and their lives. That it’s our time to stand up for these rights, now more than ever. segue…